The Legacy of Zumwalt: Innovation and Cutting-Edge Naval Technology

Admiral Elmo Zumwalt graduated from the Naval Academy in 1942 and went on to serve in the United States Navy for thirty-seven years.  He served in World War II, the Korean War, and the Vietnam War. At the time of being named to the post in 1970 by President Nixon, Elmo “Bud” Zumwalt, Jr. was the Navy’s youngest Chief of Naval Operations (CNO). He was also one of the most influential sailors of the 20th century, and served as CNO for four years. 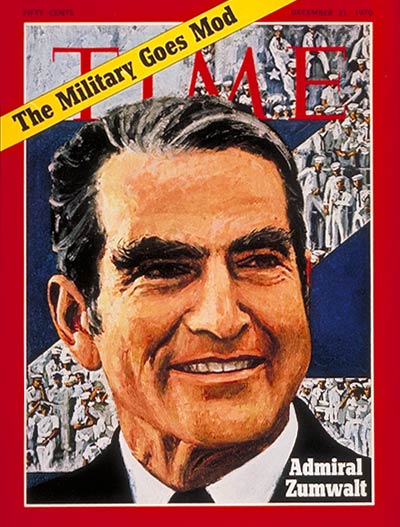 Admiral Elmo Russell “Bud” Zumwalt Jr. (1920-2000). December 21, 1970, Zumwalt made the cover of Time, which recognized his commitment of full integration of women and people of all ethnicities into the U.S. Navy.

Admiral Zumwalt passed away in 2000 and President Bill Clinton decided to honor the Admiral’s accomplishments by naming the new class of advanced, multi-mission destroyers after him and by awarding him the Medal of Freedom. President Clinton believed the CNO had radically changed the face of the Navy as both a surface warrior and a social reformer, just like the new destroyers will change the Navy. Zumwalt believed it was his job to “modernize and humanize” the United States Navy,[1] and he was a visionary leader who reformed United States personnel policies in an effort to improve the quality of life for the enlisted sailor and to ease racial tensions and gender equality in the Navy.

“Ours must be a Navy family that recognizes no artificial barriers of race, color, or religion. There is no black Navy, no white Navy just one Navy-the United States Navy.”[2] 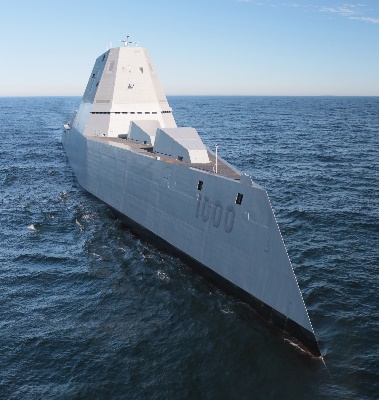 On April 12, 2014 the United States Navy christened its first Zumwalt-class destroyer at the General Dynamics Bath Iron Works shipyard in Bath, Maine. It was commissioned two years later on October 15, 2016 in the Port of Baltimore, Maryland. As is typical, the entire new class of destroyers will take the name of its first ship.

The USS Zumwalt (DDG 1000) represents the United States Navy’s most innovative destroyer class, which includes a state-of-the-art electric propulsion system, cutting-edge war fighting technology and weaponry, wave-piercing tumblehome[3] hull, and stealth design with a focus on land attack.[4] The Department of Defense had initially announced in 1990 that it would order 32 new Zumwalt destroyers, originally called DD-21 and then later the DD(X) program, but due to escalating costs the Pentagon scaled back the program to sixteen, then to seven, and finally settled on procuring only three Zumwalt-class destroyers.[5] The cost per ship significantly increased with the drastic reduction in the amount of ships being built. As there was a $9.6 billion research and development cost that was to be spread across thirty-two potential ships, instead of the three, in addition to the $3.8 billion direct cost to build each destroyer, each the USS Zumwalt is estimated to eventually cost approximately $7 billion.[6]

What does DDG stand for? DDG stands for the United States Navy’s classification in the American hull classification system. In addition to the guns that destroyers have, a guided missile destroyer is usually equipped with two large missile magazines, usually in vertical launch cells. Destroyers are warships that provide multi-mission offensive and defensive capabilities. Destroyers can operate independently or as part of carrier strike groups, surface action groups, amphibious ready groups, and underway replenishment groups.[7]

What makes the Zumwalt-class destroyer so unique?

The Zumwalt-class’s design allows it to conduct multiple roles, including surface warfare, anti-craft warfare, and naval gunfire support. In addition, it has many unique and state-of-the-art characteristics that make it different from all the other destroyer classes.[10] The Zumwalt-class destroyer was designed to complement the already existing Arleigh-Burke class destroyers. Both classes are multi-role capable, but one of the major differences between the two different class destroyers is that the Zumwalt-class will be able fight more effectively in littoral operations.[11]  Littoral operations are operations conducted close to shore.  This new capability allows the Zumwalt-class destroyer to provide land attack support for United States ground troops for several days or weeks.  Having a constant presence offshore will provide United States ground forces with long-range missile capabilities and continuous support for the Marine Corps fire-support requirements.[12]

There are also many different characteristics that separate the Zumwalt-class from previous destroyer classes, as explained in this graphic.

Here is a list of some of the fundamental characteristics of the USS Zumwalt:

When looking at the USS Zumwalt, one will notice that the structure of the ship is unlike other destroyers.  The unique shape was created for strategic purposes. The Zumwalt has a ‘tumblehome’ hull. Tumblehome means that the hull of the ship slants inward instead of outward above the waterline.  It is interesting to note that the tumblehome hull form was actually last used in 1905 during the Russo-Japanese War. The hull also employs what is known “wave piercing” in that the inverted bow is designed to cut through or pierce the waves instead of riding over them.[13] The reappearance of the old tumblehome hull design, in addition to wave-piercing technology, makes the Zumwalt-class destroyer as close to a submarine as a surface ship since much of the vessel’s structure is actually underwater.[14] 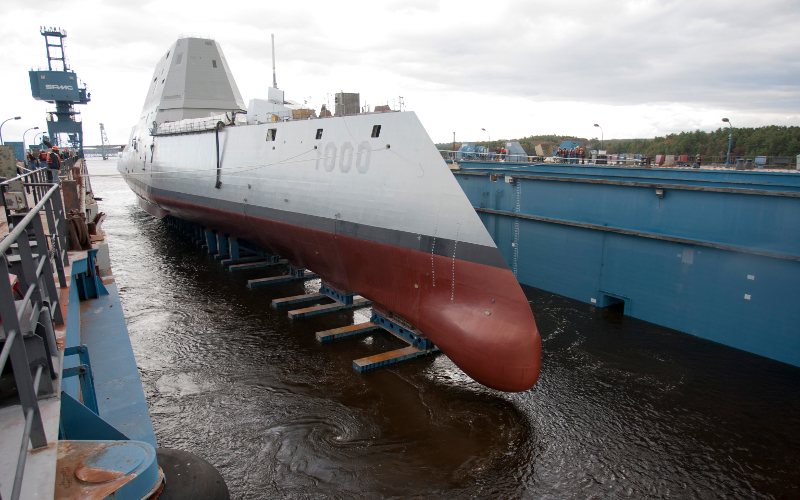 These two characteristics mean that the hull, “significantly reduces the radar cross section since such a slope returns a much less defined radar image rather than a more hard-angled hull form.”[15] In other words, the new shape of the destroyer makes the warship less visible, appearing no larger than a small fishing boat on the enemy’s radar even though it is 610 feet long and 40% larger than an Arleigh Burke-class destroyer.[16]

In addition to reducing its acoustic output due to its design, the composite superstructure also allows for a standard crew size of only 158 sailors, including a 28-member aviation detachment, which is far less than the more than 300 Navy personnel that are needed to man the Arleigh Burke-class destroyers. According to Navy officials at the Pentagon, the smaller crew size is possible because of the advanced automated systems which “make it easier and much more effective for the sailor to operate.”[17] The smaller crew size will make it less expensive to operate.

Another innovative design feature occurs below deck. The Zumwalt-class destroyer is powered by a state-of-the-art electric propulsion system. Traditionally, all United States Navy vessels are powered with gas turbines driving controllable pitch propellers through large and complex gearboxes. The USS Zumwalt is the first U.S. naval surface ship to feature all-electric propulsion. According to Alan Kabulski, director for naval accounts at GE Power Conversions, “We’re no longer restricting the engines to provide propulsion only. This design allows you to send electric power wherever you need it. You can access megawatts in a short amount of time and convert it into energy. It’s instantaneous.”[18]

The innovative technology allows the giant induction motors, which are connected directly to the propeller shafts, to route the electricity to an enormous range of sensors, weapons, radar, and ship’s services in addition to providing power to propulsion. In doing so, the new integrated power system (IPS) can free up as much as eighty percent of the ship’s power that used to be needed for propulsion just by switching to this new system and eliminating the old gearbox; in turn, it allows the ship to have almost 10 times more available power than previous destroyers. The additional benefits are a reduction in acoustic signature, an increase in available power for future high-energy weapons systems, and improvements in the quality of life for the crew. This flexibility in power allocation also will potentially have a significant amount of cost and energy savings.[19] According to Captain Jim Downey, the DDG-1000 program manager at Naval Sea Systems Command, another benefit of the new integrated power system is that the ship will not need subsequent power system upgrades even if more energy-intensive combat systems are installed in the future.[20]

The next significant technological change is in the weapons systems. The Zumwalt-class destroyer has the newest Advanced Gun System (AGS) that consists of two 155 mm naval guns and the Long Range Land Attack Projectile (LRLAP).[21] The AGS provides “flexible, sustainable and affordable firepower against a broad range of littoral and inland targets.”[22] It also provides highly sophisticated gunfire capabilities for anti-surface warfare as well.

The AGS system draws from a fully automated, below-deck weapon handling and storage system that holds up to 750 rounds. The AGS is capable of a maximum sustained firing rate of 10 rounds per minute using a water-cooled barrel. It also will fire at ranges of up to 83 nautical miles. The AGS design supports the Navy’s goals to significantly reduce overall crew requirements by eliminating the need for personnel in the magazine.[23]

The AGS 155 mm guns are turret-mounted that allows for the use of both unguided and guided munitions; pervious systems were restricted to only guided munitions.  Furthermore, newly-developed LRLAP ammunition system features the most accurate and longest range-guided projectile in U.S. Navy’s history, with a circular error probable (CEB) of only 50 meters.[24] The primary advantage to the AGS new technology is its increased capability for supporting Marine Corps and Army forces engaged in expeditionary assaults or littoral urban operations.[25]

The USS Zumwalt features a PVLS, which is a system of armored compartments located around the periphery of the destroyer. Each PVLS compartment contains and protects one MK57 Vertical Launching System. According to Raytheon, who made the system: “This design makes launchers and missiles resistant to battle damage while safely isolating them from crew and equipment spaces.”[26]

The Promise of the Zumwalt-Class

Even though there has been a lot of controversy surrounding the next generation destroyer, the Zumwalt-class destroyer will help the United States Navy fulfill its goal of being where it needs to be, and when it needs to be there. The cutting-edge technology enables the Zumwalt-class destroyers advanced capabilities, provides the ship’s unmatched versatility, and dramatically reduces manning requirements.  The multi-mission stealth destroyer of the 21st century will be able to evade enemy detection, slip into the shores along foreign coastlines, and deliver devastatingly accurate firepower hundreds of miles inland that will clear the way for amphibious troop landings. Aspects of the ground-breaking innovations and technology that were specifically developed for the Zumwalt DDG-1000 class destroyer will influence all United States Navy ships built in the future.

[3] This nautical term refers to, “the narrowing of a ship’s hull with greater distance above the water-line.” Source: https://en.wikipedia.org/wiki/Tumblehome

[8] Cindy Clayton, “Navy to name newest destroyer after SEAL who died in Iraq” The Virginian-Pilot, October 30, 2008.

[20] “Capabilities and Missions of the Zumwalt Class Destroyers,” Interview with Captain Downey by NavyLive.  February 28, 2013. http://navylive.dodlive.mil/2013/02/28/zumwalt-class-destroyer-sitrep-2/